Media literacy as a “vaccine” against “infodemic”

by Petya Vladimirova, Project Manager at the Bulgarian Hub for United Balkans

Since its beginning, immense waves of information, including extensive amounts of false information have accompanied the COVID-19 pandemic. At the same time, a combination of widespread anxiety as well as increased use of social media during lockdowns in many countries have provided fertile ground for “organic” false information and conspiracy theories by individuals who may not want to intentionally deceive anyone, but inadvertently become part of the problem by spreading and/or amplifying misleading messages.

As a result of these factors, in March 2020, the World Health Organization warned that the COVID-19 pandemic had been accompanied by an “infodemic” – “an overabundance of information – some accurate and some not – that makes it hard for people to find trustworthy sources and reliable guidance when they need it”.

Changing knowledge about the virus as well as the dynamics of its spread across the world have also resulted in sometimes confusing guidelines. Moreover, there has been uncertainty about the appropriateness of government action. All this has led to confusion over what is truth and what is fake. In this situation, misinformation and rumors appear on the scene, along with manipulation of information with doubtful intent. In the information age, this phenomenon is amplified through social networks, spreading faster just like a virus.

The infodemic is also impacting the ability of authorities across the world to effectively deal with the virus outbreak, jeopardizing lives, and increasing people's vulnerability to divisive content. The World Health Organization has declared an "infodemic" of incorrect information about the, COVID-19 which poses risks to global health.

The current coronavirus pandemic is just an example how a large and quick increase in the volume of information associated with a specific topic could be more dangerous than the real problem. That is why a major part of tackling this pandemic and all future ones, will be how each problem is explained and the ability of all responsible institutions to manage the relevant information. However, given the irreversible digitalization of our daily lives, as well as the fact that a large part of the world's countries are democracies in which freedom of speech, direct and timely access to information are a fundamental value, it becomes obvious that success of the fight against “infodemic” depends on any ordinary user of information. That is underlining the importance of some “soft” competencies such as fact-checking and media literacy.

Media and Information Literacy (MIL) emphasizes a critical approach to literacy, going beyond the ability to write, read and understand words. MIL focuses on different competencies to transform people’s interaction with information and learning environments online and offline. MIL includes competencies to search, critically evaluate, use and contribute information and media content wisely; knowledge of how to manage one’s rights online; understanding how to combat online hate speech and cyberbullying; understanding of the ethical issues surrounding the access and use of information; and engagement with media and Information and Communication Technologies (ICTs) to promote equality, free expression and tolerance, intercultural/interreligious dialogue, peace, etc. MIL is a nexus of human rights of which literacy is a primary right. ¹

The European Union also consider media literacy as a fundamental skill which may be defined as the ability to access the media, to understand and evaluate critically their contents and to create communications in a variety of contexts. This definition is built on three main elements:

Media literacy relates to «all media», including television and film, radio and recorded music, print media, the Internet and other new digital communication technologies. ²

In the context of present infodemic, media literacy is one of the most fundamental skills not only for the young generation but also for adults and is a major tool in the development of citizens’ responsibilities. Media-literate people are able to exercise more informed choices also with regard to the media content market, thus they will be better able to protect themselves and their families from harmful, offensive or undesired content.

Media literacy is an extremely important factor for active citizenship because it develops critical thinking and creative problem-solving skills and makes people informed consumers and producers of information. In this regard, countries with highly developed civil societies are countries with a large percentage of media literate people. This is also confirmed by the Open Society Institute – Sofia reports on the Media Literacy Index in Europe. ³ 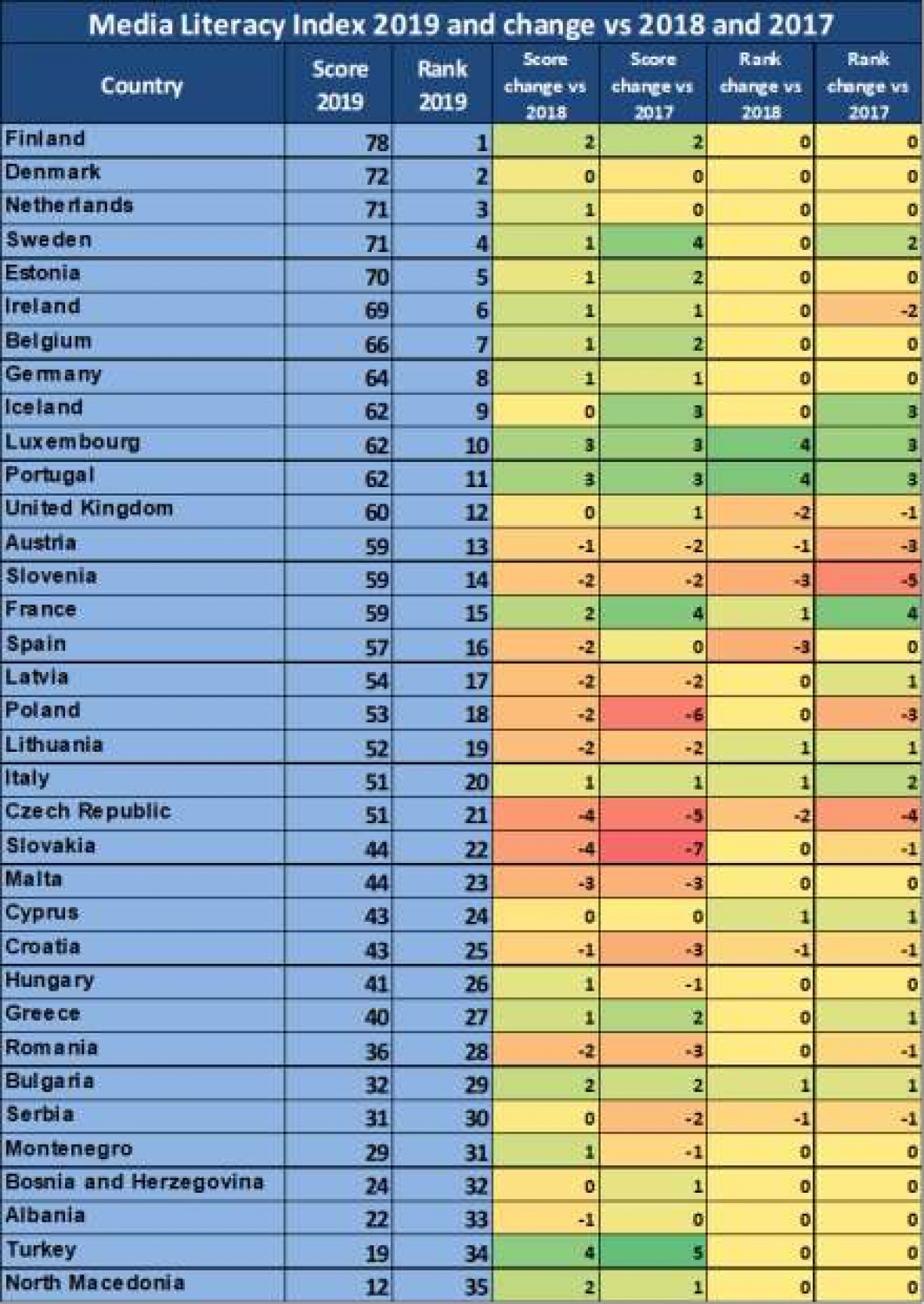 The reports show a clear trend - for three consecutive years the countries of the Western Balkans, as well as Bulgaria, Romania and Greece are at the bottom of the table with the lowest levels of media literacy.  A possible explanation for these results is that the large proportion of the population in some of these countries is really poor and the access to information and communication technologies, services and supplies is limited.

On the other hand, high levels of distrust of journalists, corruption and problems with media freedom in these countries are also serious reasons for the low level of media literacy.

In this context, the right approach is to invest in the development of critical thinking and analysis skills, ie. to increase media literacy as an effective and long-lasting solution. In any case, a better education, a healthier media environment and higher trust between people also bring a lot of additional benefits to society. As UN Secretary-General Kofi Annan stated in one of his speeches “Literacy is a bridge from misery to hope”. In the 21st century, literacy means media literacy.

1. Media and Information Literacy, a critical approach to literacy in the digital world, 2017, UNESCO.

This brief analysis is part of the joint effort by the consortium comprised of the Balkan Forum, Bulgarian Hub for United Balkans (BHUB), journalists in Bosnia and Herzegovina and Bulgaria, European Movement in Serbia (EMinS), FRONT.Online in Kosovo, IDEA South East Europe in North Macedonia, and Insajder Serbia, and financially supported by the Rockefeller Brothers Fund, focusing on Fostering regional cooperation of media in the Western Balkans region.

Find below downloadable and printable pdf