Following our blog into Western Balkan efforts to combat corruption today we focus on press freedom. A serious matter that has been under threat globally. Article 11 of the European Union Charter of Fundamental Rights states, “the freedom and the pluralism of the media shall be respected”. To this aim today we will look into the data gathered by Reporters Without Borders (RSF), an independent international NGO based in Paris with consultative status to the United Nations, UNESCO and the Council of Europe. Operating since 1985 their core goal is the protection of freedom of information.

Below we have compiled data from the World Press Freedom Index which ranks each country globally. With 180 countries present from Norway ranked 1st to North Korea ranked 180th  it is time to identify the progress being made by the six Western Balkan (WB6) countries between 2013 and 2020.

Arrows have been added to show when countries have either gained a more positive ranking than the previous year, or whether they have declined. At first glance this shows a huge contrast between the performance of each country. The highest-ranking among the six WB countries being Bosnia and Herzegovina in 2020 reaching 58th globally and the lowest ranking North Macedonia in 2016 in the 118th spot. This shows that all of the WB countries remain fairly compact in this mid-tier zone of countries that are doing some work to protect press freedom, but there is plenty of room for improvement.

Perhaps starting with the successes, it would be right to start with Bosnia and Herzegovina who have been consistent in their slow but steading improvement in ranking. In the 58th spot for 2020 they even place above some EU countries such as Croatia 59th, Poland 62nd, Greece 65th, Hungary 89th and Bulgaria 111th. With only slight declines in 2016 and 2019 they have risen by rank 10 places between 2013 and 2020.

As we focus on improvement of ranking the next country to credit should be North Macedonia who have moved up 24 positions between 2013 and 2020. Since 2016 they have shown a consistency in their progress. However, they still rank 92nd globally which should only reenergise their efforts to continue this trend.

Kosovo unfortunately does not have ranking information for 2013-2015. Their first data set being 2016 where they generally fall in the middle of the other WB countries at rank 90. What we have seen since 2016 is a very positive improvement in ranking by 20 places in the space of 4 years. They end up ranking 2nd best in the WB for press freedom. If their trajectory can be maintained, they may surpass Bosnia and Herzegovina in the coming years.

We move on to Albania who have also done well to raise their rank between 2013-2020, from 102nd to 84th. It must be said that up until 2018 Albania seems to have been making fantastic progress. It may cause some concern that following 2018 they have had a sharp decline in rank. Under their pre 2018 trajectory they may have ranked closer to Bosnia and Herzegovina and Kosovo in 2020. Instead they sit in the middle position of the WB6.

The final two countries in these rankings spark some concern for different reasons. As we begin with Serbia they could be very well compared to North Macedonia. Noticeably they both conclude 2020 ranked next to each other in 93rd and 92nd respectively. However, Serbia began in 2013 as the best performing WB country ranked in 63rd and North Macedonia ranked lowest in 116th. This sharp and consistent decline in Serbia’s ranking must be addressed otherwise it may continue to rise.

Finally, Montenegro conclude their 2020 ranking as the worst performing WB country. Having begun their ranking in 2013 next to North Macedonia they have not been as successful in seeing a consistent improvement in their ranking. Even though their rank has gone up 8 places they are still the only WB country to fall outside the top 100 countries globally. 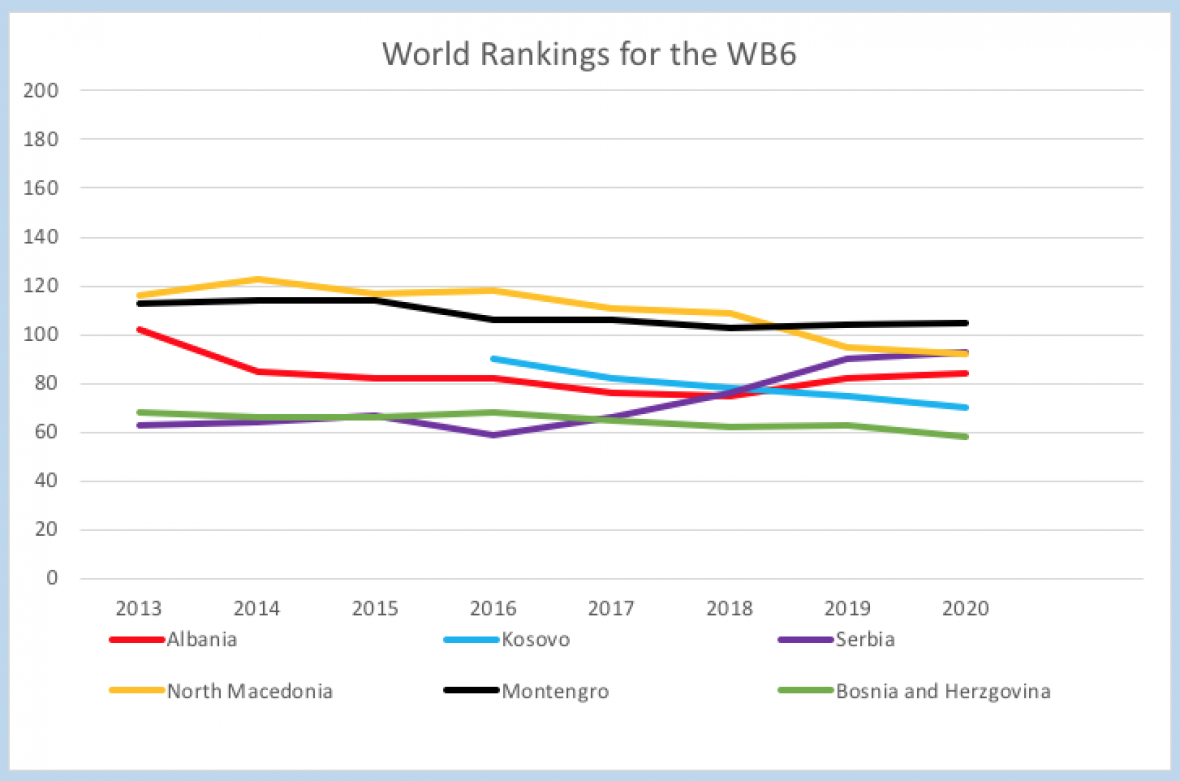 As we conclude, the data gathered from this index seems to show completely different stories for the WB countries. With some making consistent improvements such as Bosnia and Herzegovina, Kosovo and North Macedonia. And others that have made limited progress such as Albania and Montenegro, and finally Serbia which seems to be declining to some degree.

When these results are placed into the global context they show that the WB countries remain consistent as they did with fight against corruption where all countries aren’t too far away from each other. Specifically, for press freedom most WB countries rank in the middle tier globally and no country dramatically moved above or below it. This gives any of the WB countries a fantastic opportunity to be the outlier and to lead by example, Bosnia and Herzegovina being best placed to be that country.

As 2021 draws closer it would be fascinating to see which of these trends continue and whether the WB countries can make the right moves to safeguard press freedom.

Find below the link to the downloadable pdf: