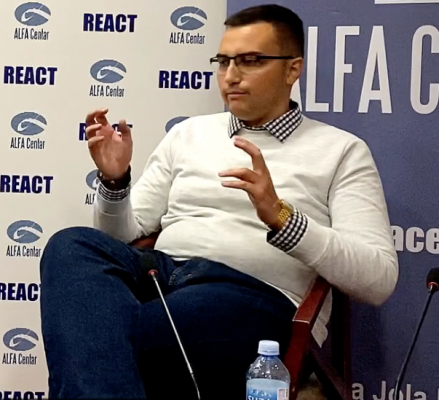 Filip Jankovski, Student at the Faculty of Security – Skopje, University of St. Kliment Ohridski - Bitola, and an activist in several NGOs/associations.

His views on countering nationalist narratives in the Western Balkan region: “Thank you for inviting me to attend this event. I’d like to mention that nationalism, extreme nationalism respectively, grows in territories that are economically weak as are our countries from the former Yugoslavia or the Balkans. In that sense, politicians, in some way, exploit this to increase their credibility. They exploit financial vulnerabilities of citizens so that they can control the theme of nationalism.

In Macedonia for example, extreme nationalism, extremists, not necessarily people but those who govern, based on some low standards have to somehow fight and live in something that they can’t as if they have good financial situation, in terms of salary and living, will not think of nationalism, to fight with someone or similar, because they think how to improve their economic standard.

For example, I live in a diverse neighborhood, where there are different nationalities. There are Albanians, predominantly Serbs, and Roma. We live relatively peacefully, in the sense that we have economic benefits from each other.

For example, we have to buy something from Albanian traders. Albanian traders have to buy something from us. In some way, it is an exchange. Exchange of good services and this simply functions in a good atmosphere. In the neighborhood where I currently live, nationalist extremism could appear but it doesn’t, because as I previously stated, there are good economic conditions and economic cooperation.”