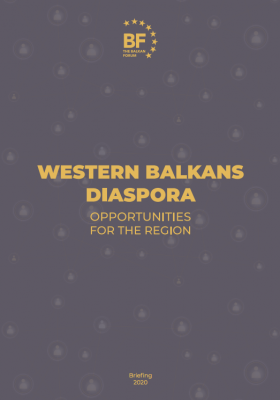 This briefing looks into the role, influence potential, intellectual and financial capital of the WB diasporas to inform larger policies for relationship-building among diverse diaspora communities, and to encourage them to have a greater role in advancing democracy and socio-economic development in their country of origin and in the WB region. It primarily focuses on Western Balkans Six (WB6) which refers to Albania, Bosnia and Herzegovina, Kosovo, Montenegro, North Macedonia and Serbia. References to Croatia and Greece, as two EU member states, are used to illustrate and as appropriate compare the data with WB countries which aspire to gain full EU membership in the future. It begins with a short historical perspective, to give context about their background, their role, influence and related challenges. It then provides a list of major projects and activities that may assist in engaging them and thereby reducing the “brain drain”. It ends with conclusions, followed by Annex 1 which provides further country-by-country detail on key government institutions and policies, including illustrative data on WB diasporas as well as prominent diaspora organisations in the EU, US and other countries.

This briefing draws on limited desk-research further complemented by views and insights of the participants who attended the Inter-Diaspora Roundtable “Looking up: discussion on the Balkan region”, held in Berlin, Germany on 25 February 2020. However its primary purpose is to encourage constructive dialogue, collaborative action, and comprehensive research and analysis on this highly complex topic of WB diaspora which particularly seek to identify positive examples of inter-diaspora cooperation that has taken place and/or recorded at any point in history, so that we can build on and work to help advance a more just, sustainable, and peaceful WB region.

Several political, social, and economic factors have shaped the Western Balkans (WB) diaspora, creating a diverse group of people with regard to thought, motivation, and engagement. Historically, in particular with reference to four major waves of emigration during the last century, people left for reasons of economy or war. Nowadays, the main ‘drivers’ are social and economic inequality, labour demand, a changing demographics in the region, which are encouraging people to leave their homes in search of a better life. A considerable proportion of diaspora keep close ties with their homelands, and are active in preserving their tradition, culture, and values. They do this by establishing or engaging with cultural, educational, political and other forms of associations in their host countries.

Diaspora can assist in the development of their countries of origin, helping to reduce poverty and promote new economic activity and employment through direct or indirect investments, such as the establishment of new businesses and trading networks, tourism activities and consumption.

WB is still dealing with the consequences of recent wars and transition of post-socialist economy, which have also influenced diaspora policies. Despite these challenges, countries have adopted laws, established institutional bodies, and enacted projects related to the diaspora. The approach so far has largely focused on what diaspora has to offer, and not vice versa. Some of these policies have also attempted to address the “brain drain” or the “loss” of skilled and qualified people to more developed countries. A key challenge for WB countries is to turn brain drain into brain gain by also creating channels for the transfer of intellectual remittances back to the region which needs to become a ceaseless priority for WB countries.

WB countries are yet to reap the benefits and potentials of inter-diaspora initiatives and projects, those that aim to not only fuel economic development, but to contribute to the reconciling ethnic divisions and reaching EU aspirations. Cross-regional cooperation with and between WB diasporas needs to feature highly on the agenda of relevant authorities of the countries of the region as it can contribute to tackling current challenges and offer alternative solutions.

This briefing was written by Ben Murgatroyd, Krenar Shala and Gresa Rrahmani. Comments were provided by Nita Bicurri and Ben Jones. It was edited by Astrit Istrefi and designed by Bernard Nikolla.

Find below the link to downloadable pdf: