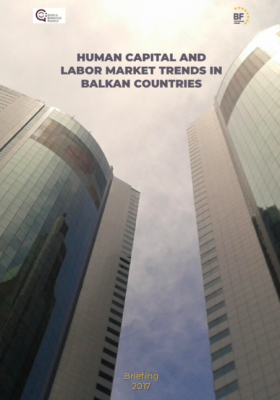 This briefing analyses human capital and labour market trends in Albania, Bosnia and Herzegovina, Croatia, Greece, Kosovo, Macedonia, Montenegro and Serbia. The report is based on comparable data, provided by Eurostat and other available international, regional and national sources. The main purpose is to provide overview of the current circumstances across the countries through available evidence and statistics, identifying key challenges and their course over the years. Considering that, besides Greece and Croatia, all countries are aspirants to the European Union (EU), the EU-28 data has been used as referent point in this report.

Historically, there is relatively high income inequality between the EU-28 countries and Western Balkan countries. Considering the available data, GDP per capita varies from the lowest living standard of 30% in Bosnia and Herzegovina and Albania, to the highest of 68% in Greece.

How to overcome the challenges?

This overview of human capital and labour markets among selected countries may itself lead to joint general recommendations.

□ Authorities must show greater efforts to respond to EU 2020 Strategy and reach its targets.

□ There is a need for enhancing the business environment by strategically planning and developing both labour and educational governance. In other words, legislative, policy and institutional action is required. Thus, broader commitment for effective implementation of already undertaken actions is needed. It must be supported by strong political will and adequate resources.

□ Public expenditure on ALMPs need to be increased together with improving public employment services.

□ Countries need to undertake and foster incentives to attract more people to enter and remain in the labour market. Combatting unemployment requires new measures and programmes. Authorities need to provide equal opportunities for men and women, as well as support in job searching, especially for youth.

□ In order to harmonise the connections between labour market and education system, better communication between these sectors is required.

□ Networking and connecting with national and regional business and educational actors need to be further fostered, as this will boost policy learning and economic development of the countries.

Find below the link to downloadable pdf: