The Berlin process has been initiated as an attempt to generate regional cooperation and facilitate integration of the Western Balkans in the European Union. Since the first conference in Berlin 2014 a core focus of the process is to “tackle corruption and organised crime” as well as creating “legal certainty with a zero-tolerance policy on corruption” (Final Declaration, 2014). To that aim, annual Western Balkans Summits took place in Vienna 2015, Paris 2016, Trieste 2017, London 2018 and Poznan 2019. All of which have reiterated a commitment to finally confront the corruption that grips all members of the Western Balkan six (WB6). Ahead of the upcoming Western Balkans Summit, it is time to look at the progress that has been made in order to contextualise what more can be done in the future.

Although corruption can take many forms, in order to classify each country, we have used the data gathered by Transparency Internationals global index who provide yearly statistics which culminate in the score out of 100.

2012 signifies the earliest date where statistics can be seen for all of the WB6 countries, and therefore provide a good benchmark for future readings. The 2012 readings reflect poorly on Albania and Kosovo who rank outside of the top 100 countries in the world.

2017 is the next date where stats for all members are available. These figures show a general improvement. Albania and Kosovo have a dramatic improvement, falling in line with the rest of the WB6. Kosovo in particular moving up 20 positions in the global rankings. Serbia moved their score above the 40 mark. Montenegro is leading the way for the WB6, some 43 position higher than North Macedonia in the global rankings. Bosnia and Herzegovina and North Macedonia were the only WB6 countries to witness a decline in ranking in 2017. North Macedonia stands out as an outlier as they move from the best performing WB6 country in 2012 to the lowest ranking WB6 country in 2017, also being the only WB6 to sit outside of the top 100 rankings.

As we progress to the most recent finding in 2019, we see an unfortunate decline across the board. Whilst North Macedonia moved up a ranking, all other countries have dropped in score and ranking. Furthermore, as of 2019, 4 of the 6 WB6 are ranked outside the top 100 countries globally.

As we conclude, the trends we can see from these statistics show that Montenegro provide the most positive example as they witnessed a dramatic rise in their score between 2012-2017 which they have more or less maintained into 2019. More research will need to be conducted to identify what was working well up to 2017, especially where Albania and Kosovo succeeded in bringing up their score. We must also ask what went wrong since 2017 and why all of the WB6 stalled and even declined in their efforts to combat corruption. 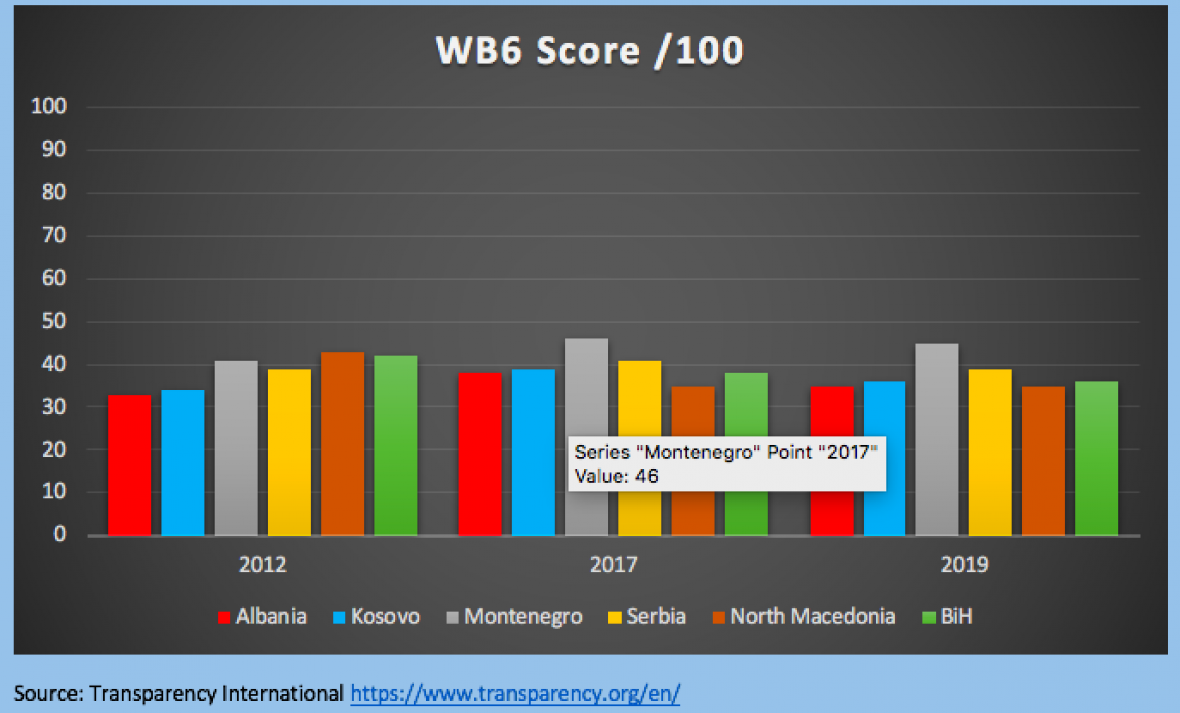 As we move closer to receiving statistics from 2020 as well as an upcoming WB Summit 2020 of the Berlin Process, we must reiterate the commitments each WB6 country has made to combat corruption and somehow reenergise these efforts as recent years provide a cause for concern that these countries are moving backwards.

Ben achieved a First-Class Bachelor’s degree in Politics and International Relation and went on complete a Masters for International Relations from the University of Surrey. He is passionate about global politics and has specialized in NATO engagements during the Post-Cold War era.  This has led a deeper interest in the Balkans, and to find work can be done to make region conflicts a thing of the past.

Final Declaration by the Chair of the Conference on the Western Balkans, 2014. https://berlinprocess.info/wp-content/uploads/2017/11/Final-Declaration-by-the-Chair-of-the-Conference-on-the-Western-Balkans.pdf

Find below the downloadable/printable pdf