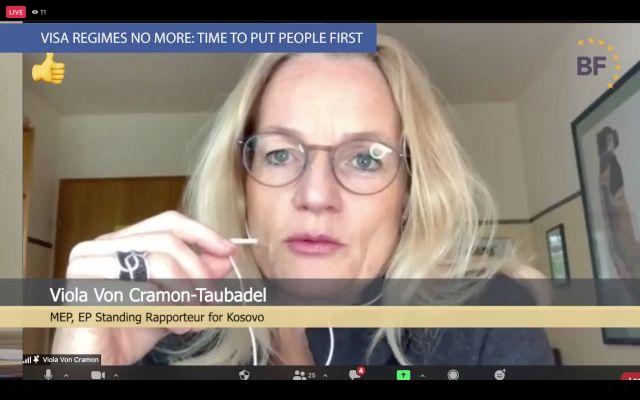 Viola von Cramon - Taubadel: I am the biggest defender of visa liberalization for Kosovo

"Well, that’s true, I am the biggest defender of visa liberalization for Kosovo, and especially for the young generation as the Ambassador has portrayed that I mean this is absolutely unfair and we in the European Parliament, as you have mentioned Franziska, have many times supported and have given green lights to visa liberalization but of course the Council, for whatever reason and especially in that respect that as France and sometimes the Netherlands, sometimes even Sweden, I have heard, are not so much in favor. This is extremely puzzling that irritates a lot, while of course that resistance is domestically driven and it's really hard if you base your election campaign as it obviously happens in France or on the Balkans.

I think that most of the people who finally come to Kosovo, finally see the region, talk to the people, they have, let’s say much differentiated opinion and can make some progress also in the capitals.

Honestly, I am as frustrated as the Ambassador and as you Franziska. So, I would be very, let's say, realistic in what we can see and what we can hope for but obviously the majority in the French society is not let’s say sensitive enough to this important topic."