Anja Živković is a graduated philologist. She studied the Albanian language, literature and culture at Faculty of Philology in Belgrade, and Greek was her second language. In 2016 she joined the “Red Info Portal” Red Cross Belgrade as a student-volunteer, translator for Albanian language.

She is an activist and has participated in Peacebuilding training “Mir – Paqe – Mir 2016”, as well as in several Youth Exchanges with participants from different countries from the Balkans. She focuses her work to contribute towards breaking down the prejudices among the people of the Balkans and promotes collaboration among all. 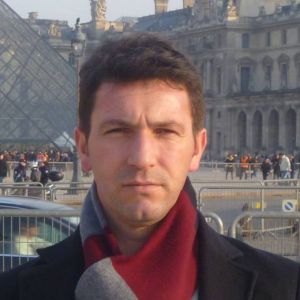 18 + years’ experience in civil society sector focusing on conflict prevention, peacebuilding and development related issues in fragile and conflict-affected contexts, leading strategic development and management/oversight of complex programs, budgets, and teams in the Western Balkans, Central Asia, Caucasus, Afghanistan, UK and USA. This includes working with Care International, Organisation for Security and Cooperation in Europe (OSCE) and Forum for Civic Initiatives (FIQ) in Pristina; International Organisation for Migration (IOM) in Kabul and Washington DC; and Saferworld in London.

As a Board member to several NGOs since 2000, he has contributed to their organisational development and to enhancing their governance and accountability.

Bernard joined The Balkan Forum in 2019 as Media/Productions Officer.

He brings over 15 years of experience with graphic design, including designing logos and branding, video and audio production and marketing. Since 2013 he started freelancing as a graphic designer for various local and international companies.

Bernard's experience also includes arts and music industry. Bernard is a singer and in 2011 he produced/launched his first album.

Bojana is passionate and has an inspiring knowledge in Politics and European Integration processes. Currently, she is working as a Trainee in the Ministry of Internal Affairs of Montenegro, Operational Communication Center in Podgorica. While previously she has worked in the NGO sector working in the area of EU integration and raising awareness for EU process and perspective for the Balkan region what is more she has also volunteered for the Red Cross Offices in Niksic.

Bojana has participated in the ERASMUS + mobility programme at the University Roma Tre, Rome in Italy. She speaks four languages, Montenegrin/Serbian, English, Russian and Italian.

Graduated successfully in medical science (laboratory, microbiology) from Khartoum University in Sudan, followed with practical work on the same field for three years.

Since 2007, she actively promoted human rights in Sudan, and participated in activities which lead to regime changes in Khartoum in 2019.

Dalya strongly believes that human rights are not a privilege but rather fundamental rights for people to have a decent life, and have the freedom to choose what’s best for them, including right to education, healthcare, culture, religion. And, where equal opportunities and respect to diversity are a reality.

She welcomes opportunities to contribute with all her knowledge and experience in the field of human rights.

Emma Sanders holds a Bachelor’s Degree in Graphic Design from the University of Hertfordshire in England and a Conservatory Certificate for Musical Theater from the American Musical and Dramatic Academy in NY, NY. Originally from Oregon, USA, Emma has spent the past 10 years living, studying and working abroad.

She joined The Balkan Forum team in Pristina, Kosovo in September 2019 and has been assisting us with creative works in Design and MultiMedia.

Over 18 years of experience in project management, human resources, institutional and organizational development. Irma completed Bachelor degree in International Relations and Diplomacy and is continuing her masters program in University of Sarajevo, department of Political Sciences.

“The Western Balkans in 20 Years: Challenges and Opportunities”, which earned her an internship at the European Movement Serbia in Belgrade.

Irma also worked as volunteer, noting here the human rights “Fight for Equality” initiative aimed at achieving better gender equality in Bosnia and Hercegovina (BiH), organized by Radio Chameleon - Open Network as part of the “Dialogue for the Future”. She was an active participant on a project “Intercultural Understanding and Cooperation of Youth in BiH”, which aimed to educate young people about the importance of culture and art for the development of society. Ivana speaks 5 languages and is a passionate writer who loves to travel. She completed two Bachelor Degrees in Law and Pedagogy: English Language and Literature at the University “St. Kliment Ohridski” in Bitola, Macedonia and currently pursues European Master in Migration and Intercultural Relations in different countries and universities.

She did her Erasmus + student exchange at the University TU Chemnitz in Germany, Department of English & American Studies, and was “Best of South East” scholar in the Karl-Franzens University in Graz, Austria, Department for Legal Studies.

She firmly believes that education is a human right and should be available to every person in the entire world. Ivana has over 5 years of experience in the non-governmental sector and participated in multiple Erasmus + trainings and youth exchanges, national conferences, and courses. 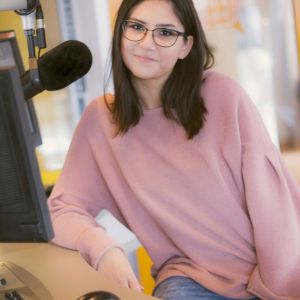 Born and raised in Zagreb, Croatia, Rabije has been working in one of the most listened radios in Croatia since 2017. She started as a show producer and was promoted to a full-time radio host. She studied Journalism and Public Relations at the Faculty of Political Science and in 2018 she got her Master's degree from the University of Zagreb. She also works for one of the biggest festivals in country – Rujanfest, as a Marketing and PR assistant and in Community management for their Social Networks.

Since undertaking an undergraduate degree in History and Politics at the University of Edinburgh and a Master’s degree in Development Studies at the School of Oriental and African Studies (University of London), Sara spent the last 12 years working for NGOs in the peacebuilding, humanitarian and development sectors, both in the UK and abroad. Her roles have spanned programme management and institutional funding, and policy and advocacy. Sara worked for both international and national NGOs, including Saferworld, BRAC UK, Oxfam GB, World Vision and AMREF. She worked in South Sudan for three years and Uganda for one and a half years. Sara is currently working as an independent consultant.

Slavko Petleski has extensive experience in procedural law, working for different projects implemented by OSCE and USAID. Moreover, he has participated in more than 15 different trainings and conferences organized by different local and international organizations in the Balkan region.

Slavko, holds a Master’s Degree in Criminal Law from the Faculty of Law “ Iustinan Primus” in Skopje, Macedonia. He has passed the bar exam and currently works in a law office in Macedonia.

Slavko is fluent in Macedonian, English, Bulgarian and Serbo-Croatian language. Additionally, he has intermediate knowledge of Albanian and Italian.

Tomislav’s experience in volunteering, working as a translator, correspondent and being an active member of society is enriching. He has worked as a correspondent for a Croatian newspaper in Subotica, Serbia, called “Hrvatska riječ” (Croatian word) since 2009. An activist of an NGO called Žene u crnom (Women in Black) in Belgrade, Serbia, and translator from Serbian to English and vice-versa since 2015.

Tomislav has knowledge and communicates in a number of languages such as: Serbian, Croatian, English, Albanian, Hungarian, Italian, French, German, Spanish and Portuguese.

Valbona Raifi has over 10 years of experience in the field of finances and accounting. During these years she has worked with a large number of different companies and organizations in Kosovo. In the finance field, she has ensured that finance systems and regulations of the employers are developed based on best practice and in compliance with  local and international legal frameworks and policies.

She is a certified accountant from SCAAK (The Accounting and Audit Association in Kosovo) and has a Master’s degree on Finance Management from the University of Southeast Europe in Macedonia.