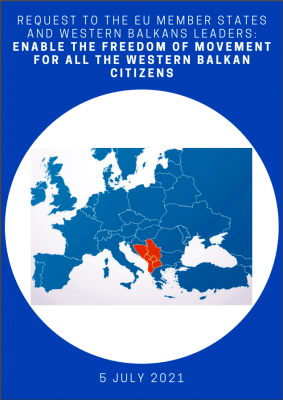 Request to the EU Member States and WB leaders:
Enable the freedom of movement for all the Western Balkan citizens

We, the undersigned organisations and individuals from the Western Balkans and European Union are urging the WB6 governments and the European Union Member State leaders to act swiftly in abolishing the visa regimes and establishing the freedom of movement for all Western Balkan citizens travelling within the region and throughout the Schengen area.

The existing barriers to freedom of movement within the region and throughout the Schengen area have been breaking family ties, harming businesses, inhibiting student and academic exchange, and preventing regional cooperation and development.

The movement of WB6 citizens inside the region continues to be challenging due to passport restrictions, as in the case of travelling between Kosovo and Serbia, as well as between Bosnia and Herzegovina and Kosovo. Governments need to understand that roads, tunnels and railways will not serve WB6 countries fully unless provisions are facilitating the free movement of people, goods and services inside the region.

Similarly, opportunities for WB6 citizens are much more limited when it comes to contributing to and benefiting from regional projects but also to larger EU programs which have proven to be beneficial for students, researchers and young entrepreneurs - such as the Erasmus+ Program - offering life-changing experiences to EU citizens. When such opportunities are present, they tend to be available only to people in the Western Balkan region whose passport allows them to travel more easily, without going through the lengthy and costly procedures of acquiring a Schengen visa.

Passport restrictions and visa regimes within the region are significant obstacles that have to be resolved urgently. The upcoming Western Balkan Summit in Berlin is a major opportunity for abolishing the visa regime and enabling the freedom of movement in the region.

Exploring the potential of human capital within the Berlin Process has been vital, which enabled the involvement of youth and civil society as promoters of social change and seen as an investment in people’s mobility. EU support has often been missing this social aspect, which can have a meaningful and sustainable impact on citizens and societies.

However, citizens of Kosovo remain the only ones in the region that need a visa to travel to the Schengen area. Despite the fact that in 2018, the European Commission confirmed that Kosovo had fulfilled all the benchmarks of the visa liberalisation roadmap, and the European Parliament has voted in favour of the Commission’s proposal, the latter is still pending in the European Council.

Find below the downloadable/printable pdf file

Also a PETITION is being signed by hundreds of citizens in the Western Balkans and EU. You can sign the petition here